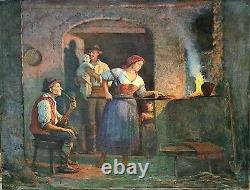 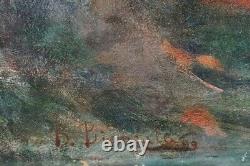 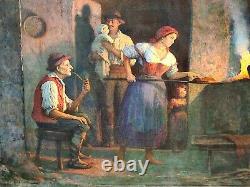 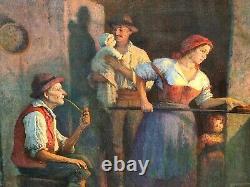 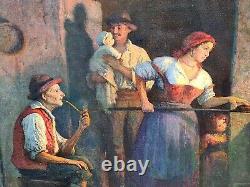 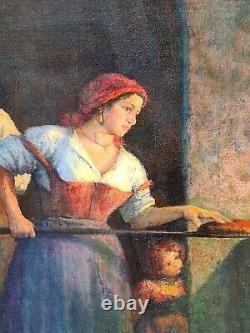 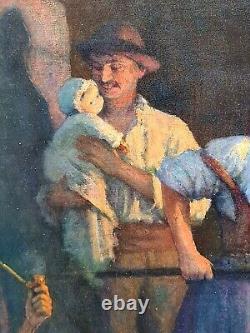 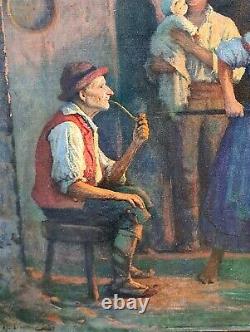 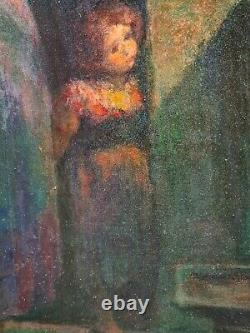 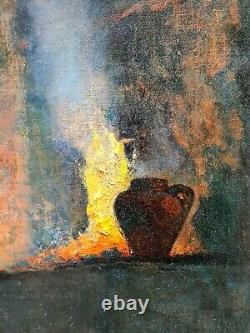 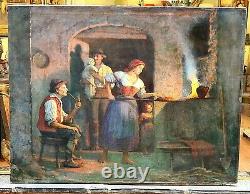 Antique painting, important oil on canvas signed at the bottom right of the Italian painter bernardo bianacale dated 1899. From the background of the artist's workshop, this work was one of the most important and allowed the painter to be recognized at the Milan salon in 1899.

The painting represents a genre scene where one sees a Milanese family in a wood oven or pizzeria. The wife bakes a bread in a wood-burning oven from which the light of the fire comes to illuminate the different faces of the family; the father filled with fatherhood holding the last born; the little girl at the foot of her mother amazed by the flame of the wood-burning oven and finally the grandfather sitting watching with pride the perenity of her home. Work in the realistic style of the painter Jean-Francois millet with impressionist touches, important work on light, dark light (chiaro-scuro). Very nice condition, a small restoration, see photos. Painting visible at the toulous gallery.

Additional photos available on request. Dimensions: 137, 5 cm / 105 cm. Bernardo biancale was born in sora in italia on September 24, 1869 - the son of the self-taught painter pietro biancale. He was the first-born of ten brothers: vincenzo, annunciata, domenico, filomena, attilio, erminio, restituta, rocco and a stillborn.

He had a controversial youth because, according to some, he was walking "young neglected, without a penny in his pocket." At the age of 19, he enrolled in the Institute of Fine Arts of Naples where he was taught by gioacchino toma, stanislao lista and licata who helped to offer the young student an artistically stimulating but statically academic environment. In his spare time he attended the workshop of the carpenter luigi fosca, brother of the much more famous pasqual sculptor. He soon returned to sora after a brief period in Roma. In his home town, he came into contact with the Danish group (zartmann, kroyer, peterssen, mayer-ross and others) who had settled in the city.

He organized his first personal exhibition in sora in 1898 in his house and in the same year he was admitted to the exhibition r. Triennale of the Academy of Fine Arts of Milan. In 1902, he decided to settle in Paris, the artistic capital of Europe. He moved to the Montmartre artists' district and was soon joined by his brothers attilio and erminio.

He married Marta, the daughter of a jeweller of the rock, for whom he had performed some portraits in the past. The brothers all returned to Italy at the beginning of the First World War, in time to see their mother suddenly died the next day. In sora, he was entrusted with the decoration of the church of san rocco and the church of s. Andrea apostolo di campoli appennino. The brothers and marta returned to France in 1919, where Bernardo began painting on canvas and exposing in public.

In the same year, he met antonio valante, the brilliant scenographer and compatriot, the actor e. Coqueline he also occasionally worked with picasso, of which he did not share the same pictorial style and for which he was the object of the ridiculous picasso as being still an observer of a classic painting of the Neapolitan school far from the modernist evolutions of which bets were impregnated.

From 17 to 28 May 1926, he presented in Paris an exhibition of old and recent works at the young Bernheim gallery. In the same year, he became a widower and settled with his brother erminio in Paris for about two years.

At that time, he met the young opera singer virginia belly, whom he fell in love with when he married her at the age of 60. This arouses the perplexities of his brother erminio who is worried about the fate of Bernardo because of the ill health of his thirty - year - old bride. From 9 to 24 July 1943, he took part in the exhibition organized on Rue de la Paix by the Parisian section of the union of fascist fine arts in a bet still - little time - occupied by the Nazis. Massimo campigli, chirico giorgio, pisis filippo, m. Fumo, gino severini and mario tozzi exhibited with him in the painting section.

From 15 to 30 September of the same year, he exhibited at the suzanne froissard gallery, rue la Boltie. His last known exhibition was at the carpenter's gallery, rue du faubourg saint honored in 1958. He died accidentally, as the newspaper reports, at the age of 91 on February 28, 1959.

All of his assets and many of his paintings were auctioned to cover the debts incurred due to the high costs of his opera's care. Contact me for more information, foreign buyers welcome. This item is in the category "art, antiques\art of xixe and before\paintings, enamels". The seller is "placedelart" and is located in this country: fr. This item can be shipped to the following country: whole world.